Intelligence For Your Life - Pet Fish Can Recognize Their Owners!

Pet Fish Can Recognize Their Owners!

Your pet fish may be able to recognize your face! 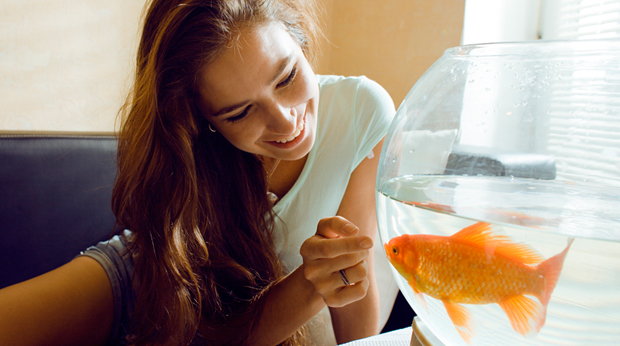 Your pet fish may be able to recognize your face! Scientists from the University of Oxford in England have discovered that a certain species of fish can differentiate between human faces - meaning they know which faces are familiar and which aren’t. And they can tell the difference between you and your roommate. That was something that was once thought possible only among primates, like orangutans, chimps and gorillas - animals with large, complex brains. So how did the scientists figure out that fish can recognize us?

They trained archerfish, which are fish that spit water from their mouths —to spit water at a human face displayed on a computer monitor positioned near their tank. Researchers then flashed the familiar face on the screen along with over 40 other faces. And over 80% of the time, the fish spit water at the face they recognized.

And that’s not easy to do! Think of how many times you’ve mixed up the faces of different people! Because human faces can be very similar, since we all have the same features.

Now, not ALL fish can recognize people - because fish typically have limited contact with humans. But the study shows that some fish, when given the opportunity, can think in sophisticated ways.