Intelligence For Your Life - How Our Dogs Show Love!

How Our Dogs Show Love!

Most pet parents tell stories about how their dog knew they were upset and came to comfort them... 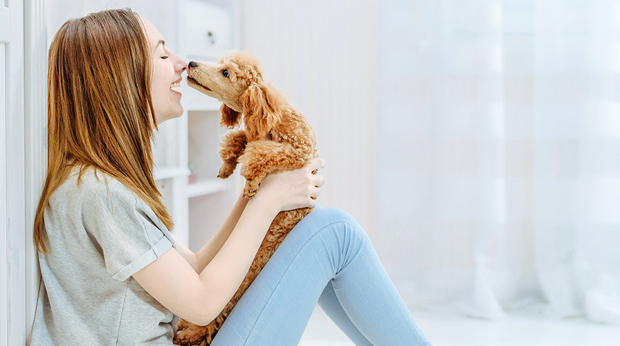 Most pet parents tell stories about how their dog knew they were upset and came to comfort them - or even comforted a perfect stranger. Researchers call it “canine empathy.” And the latest studies show dogs will not only try to help, they’ll actually overcome obstacles to do it. That’s from Dr. Emily Sanford, a brain sciences researcher at Johns Hopkins. She and her team put people and their pets on opposite sides of a glass door held shut by magnets. The dogs could see and hear their owners, but couldn’t reach them unless they pushed through the door. The result: About half the dogs - regardless of breed - got through. But they came four times faster when the owner pretended to cry, compared to when they hummed “Twinkle, Twinkle Little Star.”

Dr. Sanford also measured each dog’s stress - based on behavior and heart rate. The result: Every dog was somewhat stressed by being separated from their owners and handled by strangers in a strange place. But the dogs that felt the least stressed were those able to breach the door and “rescue” their owners. The researchers believe the ability to take action relieved their stress. But the dogs that froze and didn’t know what to do… or couldn’t open the door, were frustrated and their stress skyrocketed.

British researchers also found when a stranger in a stressful environment pretended to cry, dogs would approach, sniff, nuzzle and lick them, rather than turn to their owners, seeking comfort for themselves.

So, why are dogs so tuned into human emotions? Because they’ve lived side-by-side with humans for tens of thousands of years, and have developed the ability to read out emotions.